skip to main | skip to sidebar
Donnaca Kennedy intends to row 100 Kms on the Shannon, starting on April 26th. Donnaca who describes himself as an ex cancer patient will start from Carrick on Shannon with the intention of raising money for Cancer Care West.

Cancer Care West is a voluntary organisation set up to fill the gap in our Health system providing support and accommodation to those attending Galway Hospital for cancer treatment. This treatment, although it takes only minutes each day, often extends over six or seven weeks. Donnaca took advantage of this facility and after his seven weeks stay came away an enthusiastic supporter of the ideas and the staff who run it. "Cheerful Efficiency" is how he describes it.

Assisting Donnaca will be his sons and daughters, Ciaran, Colm, Donal, Pierce, Ana, Helen, Aoife, Bairbre, Mary and Una. Also assisting or hindering will be the next generation, Tadhg, Killian, Caoimhe, Hannah, Aoife Tosiko, Liam, Darragh, Roisin, Niamh, Hugh, Conor and Donnaca Og. And, of course, wife Dickie. Donnaca himself has spent most of his life on the Shannon River initially running Barge Holidays with his wife Dickie and later skippering Moon River passenger vessel out of Carrick on Shannon and retiring last year (not exactly early retirement). He is undertaking this crazy assignment because he thinks that Cancer Care West are doing a great job and can only continue with support.

The boat Donnaca will row is a 17 ft. lake boat built by Perry of Belmont and he bought it second-hand in 1973. He will be backed up by a small barge skippered by one or more of the above named team.

If you would like to sponsor Donnaca and this very worthy cause, please follow the paypal link on the right hand side.
Home 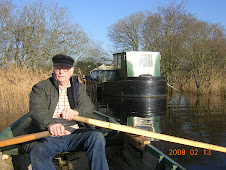 To find out more about the great work Cancer Care West are doing, visit their website at http://www.cancercarewest.ie/

€6,000 raised for Cancer Care West! Thanks to everyone for their support!

scroll down for more details and photos of Donnaca's 100km row...